NFTs get more strange by the day.

Released on April 22nd, Anata is a 2,000 item NFT collection on the Ethereum blockchain that aims to concretize NFTs as a form of identity with live, reactive, and interoperable digital art.

The brain-child of a collaboration between bigdsenpai’s team and Hologram.xyz (a web3 self-expression engine) — each Anata NFT can synchronize with webcam, phone camera, and microphone, so that Anata holders can appear embodied as their avatar on any video medium (whether that be Zoom, Twitch, TikTok, Facetime, etc,.)

Talk about immersive art . . . your every head, mouth, and eye movement will be picked up by your camera and then fluidly translated to appear as though it is the Anata speaking, the Anata scratching its head, or the Anata getting ready to sneeze.

More than just being a first in terms of NFT technology, Anatas were designed to contain layers of utility from day one — we should clarify, what follows is not so much Flip’s official opinion but more like conjecture we’ve drawn and paraphrased from an extensive Anata demo on Twitch.

At the forefront, Anatas are about virtual agency and being able to express your digital identity via these unique anime-style avatars. After all, elements of pseudonymity are everywhere within crypto, whether it be alternate accounts on Twitter, cartoonish pfps, or people wearing masks and utilizing voice-changers during podcast appearances.

Wearing an Anata plucks many of these identity chords; it lets you filter your physical appearance while also expressing your sincere or ironic interest in anime art (art that, apparently, cost the team “a few lambos” worth to design and rig), as well as your membership in the Anata community and its accordant clout/social-signaling oomph.

Within this identity morphing ethos, Anatas are also meant to tackle the shortcomings of static NFTs by allowing holders to continually customize their avatar’s expression with emotes (like changing your eyes to be on fire,) voice modulators (with pitches ranging from absurdly deep to comically high,) and adaptable backgrounds (like this one pictured below, which has been layered in front of a Fidenza.) 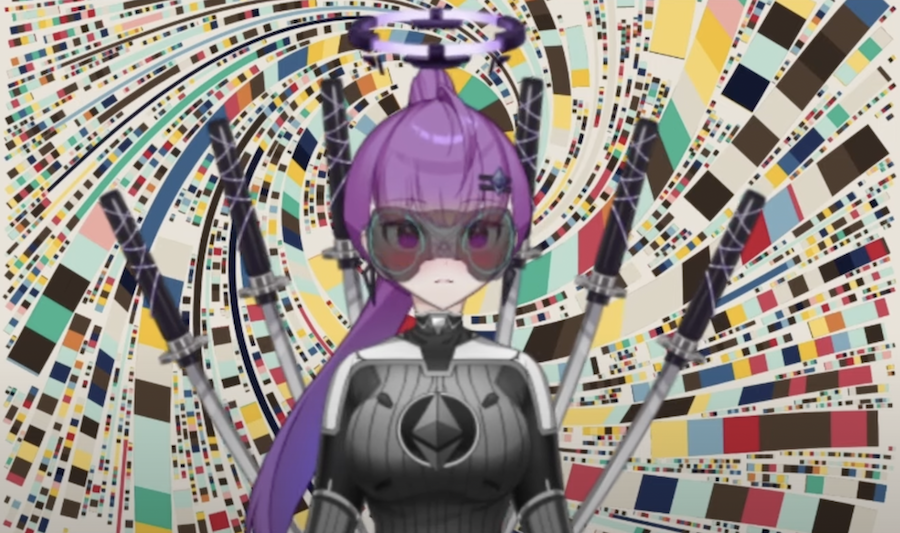 Equally though, Anatas are about pragmatism — no more rushing pre-zoom-meeting to change your shirt or clean up your disheveled office backdrop — just sync with your Anata, and you have an engaging, presentable virtual self to project.

Ok, maybe not everyone wants to show up to a business video call embodied as an anime warrior, but still, we have to admit the general concept is intriguing.

Think about all the times you’ve been hesitant to hop on a video call, not just because of the preparation it takes but also because of the mental load it requires. Video calls, despite their convenience, can be mentally taxing events if you’re expected to appear overtly cheerful and professionally engaged (which, for people with low-key or introverted personalities, can require double the psychic effort; appearing _happy and engaged vs. simply _being in those states.)

In theory, Anatas can act as relaxing virtual barriers that minimize mental load, relieve anxiousness and self-reflexivity, and paradoxically, allow one to be a better video version of themselves. In practice, well, we’ll see what happens . . .

The team behind Anata explicitly admits that although their NFTs are imbued with pfp and video utility from day one, there will inevitably be use-cases for Anatas that they could not foresee. For this reason, they are sending 50% of the mint revenue to a treasury directed via governance. Their claim is: unlike many treasuries in DeFi, the Anata treasury will not be set up to solely grow, but rather to be continually burnt by spending funds on building out Anata further. And while the team already has some ideas for how they might expand the project — like making Anatas 3D and VR compatible — they’re hoping that the community of Anata holders will vote on the direction they want to see the project go.

And, considering the Anata mint-auction raised around 10.5k Eth (at a final minting price of 5.25 Eth,) burning the aforementioned treasury will take some serious, creative spending and, hopefully, result in exponentially more value for holders of Anatas.