In a previous blog post, we talked about the increasing criterial pressure for pfps to come with some form of utility.

Here we are, late march, and it’s all about ApeCoin.

Yesterday Yuga Labs and BAYC announced a monumental drop with ApeCoin. Today the airdrop is live and major exchanges have already listed the monkey token.

ApeCoin was set up in collaboration with Yuga labs but is not technically owned or run directly by them, and is administered by a DAO.

The APE Foundation is a steward set up to act “not [as] an overseer, but [as] the base layer on which ApeCoin holders in the ApeCoin DAO can build.”

As the ApeCoin piggy bank, ApeCoin DAO has plans to fund development of games, events, merch, and even a decentralized NFT marketplace, but more broadly, will ensure that the community gets to vote on its own direction rather than The APE Foundation or Yuga Labs ruling with a heavy club.

The tokenomic breakdown of the one billion ApeCoins will favor some more than others with: 16% of tokens going to Yuga Labs (6.25% of which will be donated to the Jane Goodall Legacy Foundation, a sort of monkey charity), 14% going to launch contributors, 8% going directly to the four original founders of Yuga Labs and BAYC, and the remaining 62% going to the community (Includes BAYC and MAYC holders, as well as tokens for DAO treasury and resources) 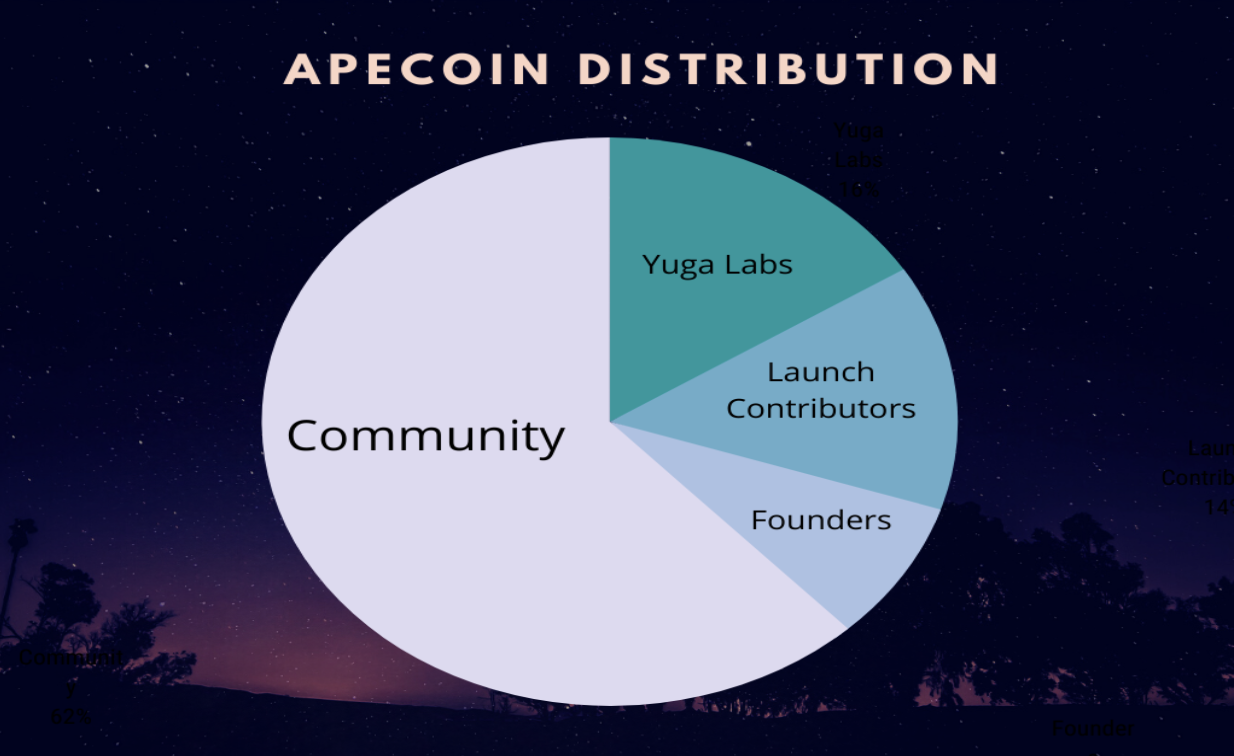 ApeCoin acts as a special access key, an incentivization tool for developers, a governance token for ApeCoin DAO, as well as a form of currency for BAYC-related products and services, including the game ‘Benji Bananas’ from Animoca Brands and nWay.

More generally put, the purpose of ApeCoin, according to co-founder of Animoca Brands and ApeCoin DAO board member Yat Siu, is that “the BAYC community … will reach much larger audiences due to the fungible and transferable nature of ApeCoin.”

You can almost feel the roving eye movements of similarly slotted NFT projects — many will be watching to see whether ApeCoin truly enhances or detracts from the already successful BAYC community. At the moment it’s still early and rather unclear. In terms of the past 24 hours, the floor price for BAYC has shot as high as 108 Eth, drooped as low as 77.5 Eth, and now rests at roughly 88 Eth.

With a host of new money sloshing around in the space and the ApeCoin price currently hovering between $7-10 (indicating a Fully Diluted Value of over $8.7 billion,) it will be especially interesting to see how tokens get distributed over the coming days and weeks.