Whether it be Runescape or Monopoly, you learn a great deal about market dynamics from playing games. Fantasy Flip was no exception; our NFT paper-trading competition surfaced some poignant reminders about the way fortunes are made and lost in NFT markets.

In early October, thousands of degens started out with 100 (fake) Eth sitting in their wallet, and one simple goal: Flip NFTs for the greatest profit.

For many, their first instinct was to deploy ASAP, spread out their capital, and drive stakes into the virtual marketplace. 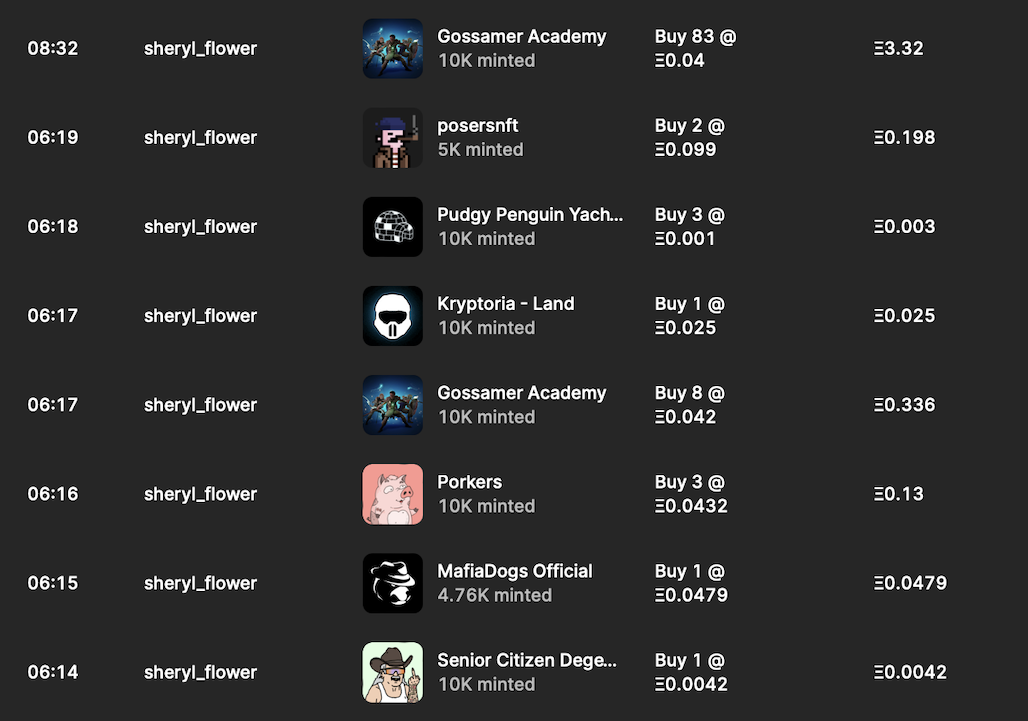 Of course, not all deployment strategies were equally effective, and with over 133k Eth traded throughout the competition, it’d be tough to categorize all the different strategies. Nevertheless, we did notice some similarities in how people built their portfolios.

The Nihilist Degen: Buying the most pumpable projects with zero regard for fundamentals, roadmap, or sincerity – underlying assumption is that the market is entropic, and risk is the name of the game here.

The Mixed Bag: Buying a basket of both moonshots, blue chips, and art projects – these folks were torn between the riskless nature of the game and rational/sentimental instincts – many eventually sorted out into one of the two aforementioned extremes as the competition drove on.

In hindsight, one could argue that the best deployment strategy might have been to do nothing initially – like a frog on a lily pad, just sit and wait for a fly to buzz within tongue’s range – only deploying your Eth when there was an alluring reason worth deploying. 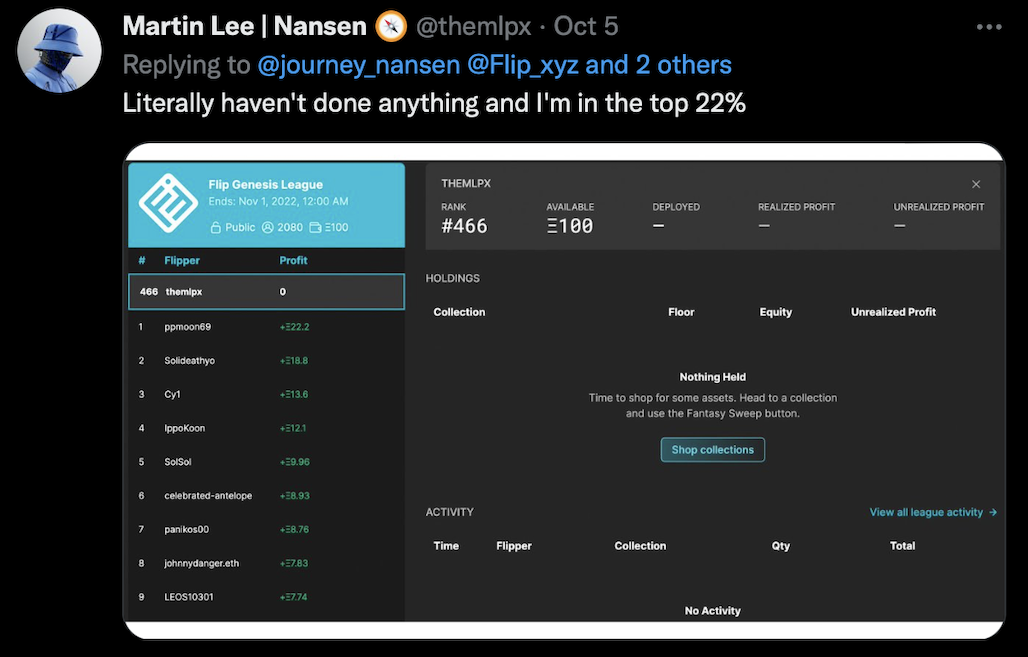 Across time, though, the passive were left in the dust, and the folks who remained were all quite active, albeit in their own ways.

Some were actively buying up and then hodling fine-art collections, like Burly-Galago (who finished #7 in the league.) 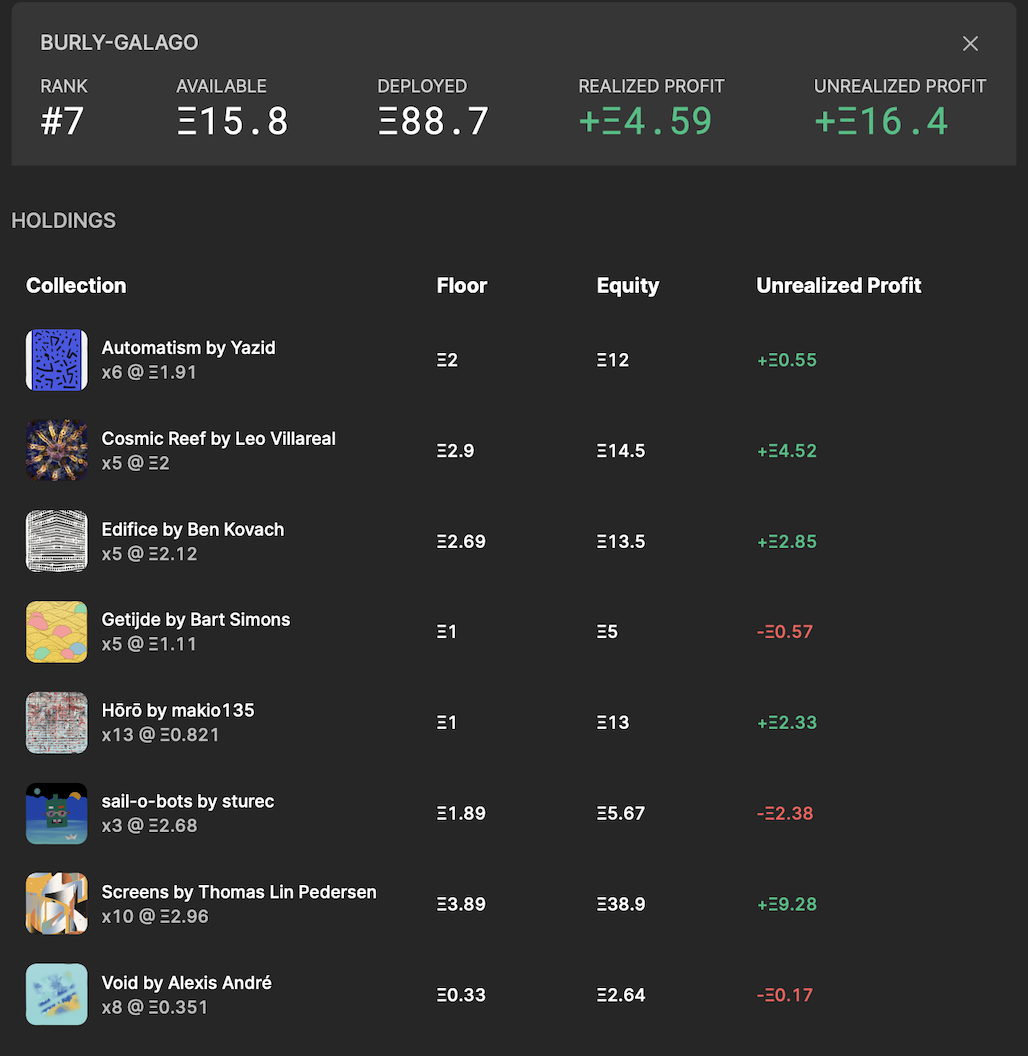 Others we’re taking advantage of blue chip price disparities, as well as the occasional pump and dump. 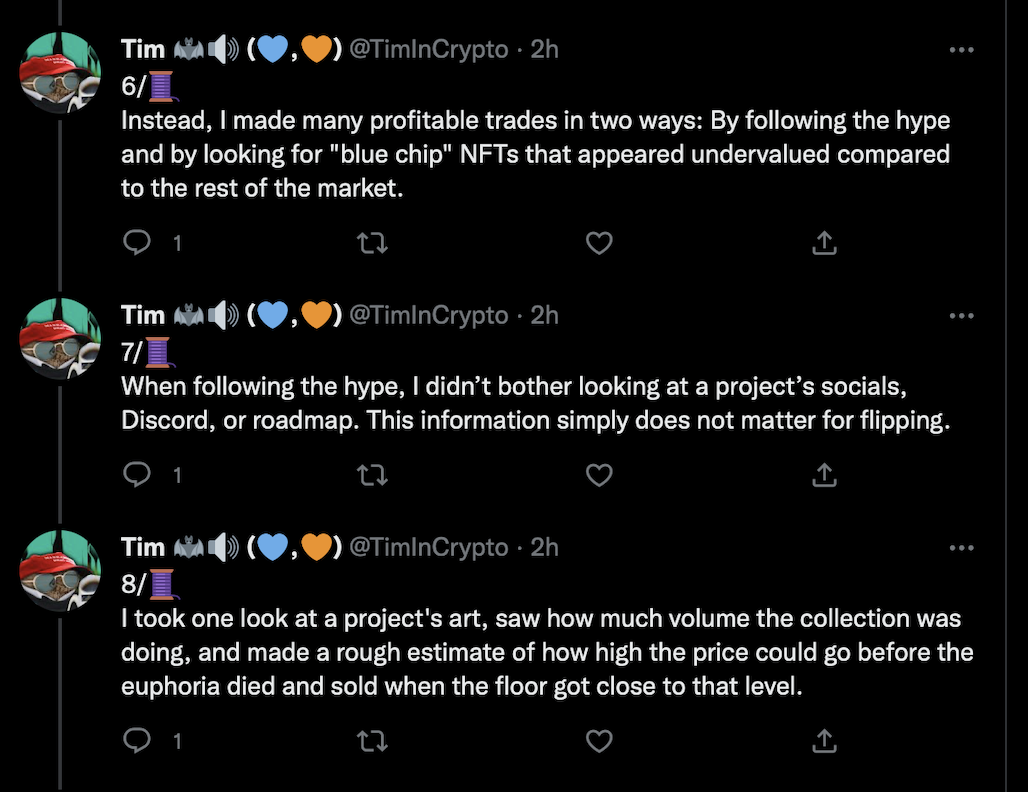 And then you’ve got folks like Solideathyo, the Flip Genesis League champion, who basically didn’t touch blue chips or fine art collections, and instead started off trading a relatively diverse mixture of trendy low-to-mid-cap collections. 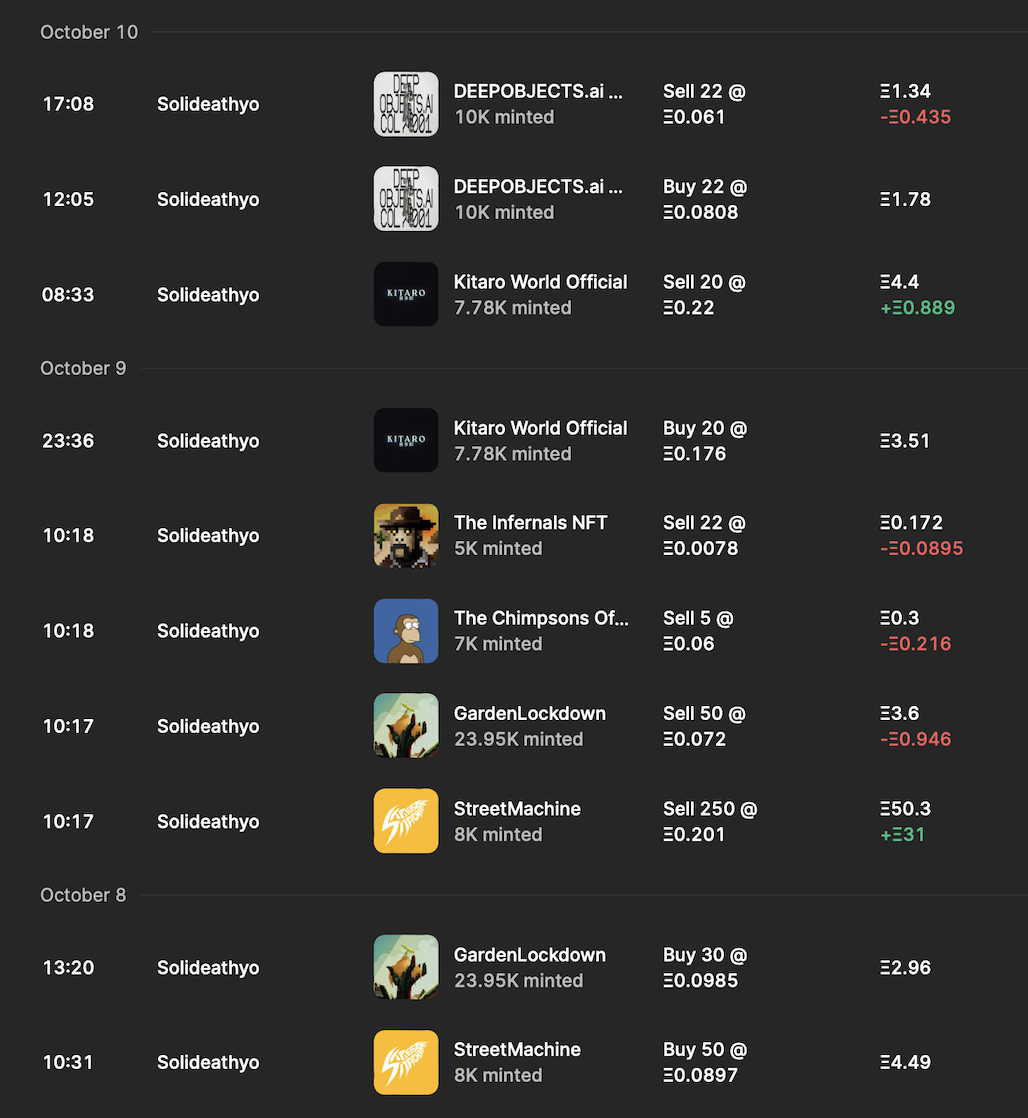 Interestingly though, once Solideathyo had built up a solid lead with the diversified strategy (streetmachine being a big winner from that), they pivoted their approach and focused their buys/sells within one collection — We’re talking dozens of back-to-back ‘Nyolings’ transactions. 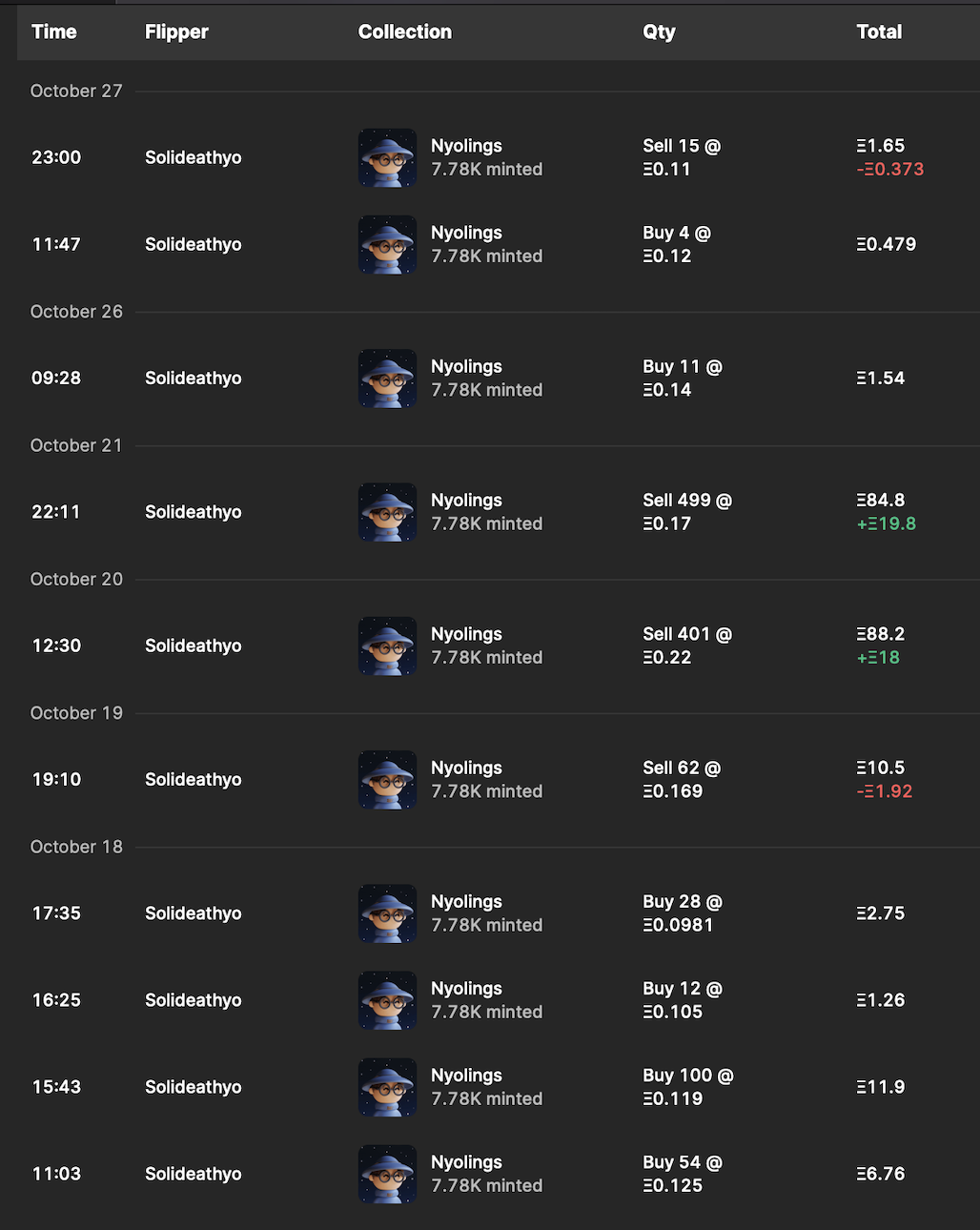 There’s probably quite a bit more we could say about Solideathyo’s ability to master the ‘Nyolings’ floor price volatility, but we’d risk treading into waters of survivorship bias. Instead, let’s recap some of the broader lessons here:

In the very short term, we were reminded that doing nothing is better than doing something for the mere sake of action. We were reminded that most blue-chip or value-buyers miss out on the fun intra-month price action — but also, that specializing in niche/trendy projects, as opposed to diversifying into established projects, at least from a Flippers perspective, can be pretty lucrative.

Disclaimer: This is not financial, legal, or tax advice. This article is strictly educational and is not investment advice, legal advice, tax advice, or a solicitation to buy or sell any assets or to make any financial decisions. This newsletter is not legal, financial, or tax advice. Talk to your lawyer, accountant, or tax professional. Do your own research. See Flip’s Terms of Service for more details.