Flufs, Party Bears, Thingies, Seekers, Burrows, Eggs, Buzzies, Ray Guns, Scenes & Sounds . . . there are a lot of moving parts when it comes to understanding the FLUF World Ecosystem. Nevertheless, that’s why we’ve interfaced with the team and written this piece: to boil down some of the different FLUF World intricacies, as well as to provide an overview of how all these interconnected NFTs come together. So, here it goes!

According to Aaron McDonald (Co-founder of Non-Fungible Labs, the main team behind FLUF World), the end goal is for FLUF World to be a “properly scaled mass-market metaverse play and earn ecosystem”; however, it’s the process they’re taking to get there that feels quite unique.

McDonald cites that you’ve got essentially two ways to go about the metaverse-play:

The thing though about “building narrow and tall fast”, is that “[it] looks amazing to begin with . . . everyone stares at the marvel of the tall thing. But it's very difficult to keep that going, eventually there is a collapse.”

Whereas, if you, “build broad and deep, then build up”, you need more time and you also have less of a carrot to dangle; you require your community to be patient and have faith, as opposed to pushing quickly, poorly-built but shiny objects in front of them.

Fluf has elected to take the less-sexy, albeit more robust approach to building their metaverse. They’re starting with a wide, sturdy foundation — they're providing the component pieces, giving us complex lore, characters, environment, and rule-sets to ensure that FLUF world “will engage millions of users over a sustained period of time.”

McDonald refers to World of Warcraft and Marvel for evidentiary support: “Think about all the storylines in World of Warcraft; you could spend your whole life in there and never discover it all. [Likewise,] Marvel has 7,000 MAIN characters; 50,000 in total. All great ecosystems build out this way. Some people think you can just buy up IP and smash it together and force the metaverse to happen. Sorry, it doesn't work like that — it's incredibly difficult to merge things that haven’t started out with the end goal in mind.”

And by all means, it doesn’t feel like they’re just talking the talk. The foundation they’re building is extra in all the right ways. Take, for instance, their relationship with ASM (Altered State Machine) — Fluf World is imbuing certain characters with a dash of ASM’s patent AI and machine learning system to ensure their metaverse is sticky and dynamic — meaning, your choices produce information-rich outcomes in a much larger decision space, a space where even NPCs are flexing their free-will.

Of course, it’s yet to be fully revealed what Fluf World will ultimately look like or how exactly these component pieces will come together — but, for speculation’s sake, we can imagine (just as an example, not as an alpha leak) a world where: Party Bears are using Buzzies to harvest honey → honey is being shared with Thingies in exchange for AI-generated artwork → royalties (priced in Mycelium) are collected from Thingie artwork sales and sent back to a Fluf → said Fluf uses Mycelium earned from artwork sales to renovate their Burrow → that renovated-Burrow is used to breed more Fluflets and throw parties (DJ’d by their Party Bear friends) . . .

If any of this intrigues you, you should read on below to get a better feel for each of FLUF World’s current collections and collaborations.

Flufs – The genesis collection for FLUF World, Flufs, is a 10,000 item collection of 3D bunnies complete with a head-bobbing animation and their own personal soundtracks kicking off what is now becoming a popular format of mixing avatars with music. Being both sensorially attention-grabbing and conceptually foundational, Flufs can be thought of in terms of identity, investment, and intersection – aka, they do a little bit of everything.

Burrows – Virtual real estate for virtual bunnies — think of it as your personal clubhouse in the metaverse – Burrows come in all shapes and sizes, everything ranging from the 16-parcel ‘Studio Snoop Dog’ down to the 1-parcel plebian ‘Den’. As time moves on, Burrows will become more than just a flex – they’ll also be pragmatic hubs for breeding, interaction, and land ownership. 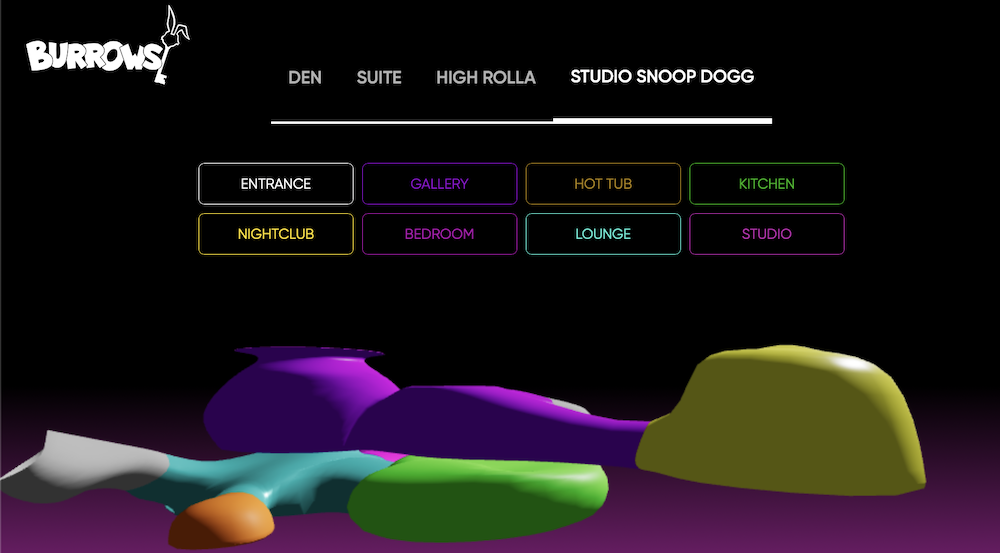 Eggs — Mycelium-powered incubation chambers with a spectrum of attributes and rarity, these 10,000 Eggs are the key to Flufs increasing their population through breeding. The eggs aren't quite incubating yet, but once they become functional, eggs will become the conduit through which Flufs can breed and hatch Fluflets and maybe other creatures and companions from within FLUF world.

Party Bears — Running separate but parallel to Flufs, Party Bears, is a similarly 3D head-bobbing, multimedia avatar collection. Party Bears double as a pfp, a virtual DJ, a ticket to events, and just like the Flufs, their background and music file can be swapped out for different combinations by purchasing from the Scenes & Sounds collection. Also, coming soon for Party Bears are ‘Party Packs’ containing “everything you need to party in the metaverse.”

Thingies — One of many Fluf-adjacent collections, Thingies is a 10,000 item collection featuring spider-like critters with a twist – their fur pattern and color is is AI-generated so that each one is a 1/1, they have mysterious backpacks, and each Thingie is an ASM-ai integrated artist, meaning a Thingie can produce its own works of art and objects as NFTs.

Seekers — Dubbed as companion bots, the 47,892 item collection of Seekers is much more than metaverse sidekicks. In addition to being interoperable (across metaverses) and fully customizable with a growing parts collection, seekers enable communication and trade throughout FLUF World, as well as double as reward-yielding nodes on the growing Sylo Network. In a simplified sense, Seekers are like the smartphones of Fluf World, constantly gathering and distributing information, but more generally, making gaps of time and space a little less daunting.

Buzzies — A companion collection to Party Bears, these 10,500 Buzzies can be summoned with a HNI pot, where they will be useful as honey-harvesters for their hungry bear friends.

Sounds & Scenes — Applicable to Flufs and Party Bears, the 94 item Sound & Scenes collection allows holders to swap out the music soundtrack or the visual background for their Flufs and Party Bears. Want your Fluf to be headbobbing to the sound of ‘Carrots and Coffee’ techno? Done. Or, want your Party Bear to be poised in front of a baby-blue Lambo? Also done. Keep in mind, these Sounds & Scenes could have second or third-order effects down the road — for instance, music and background combinations could play a role in Flufs’ breeding compatibility.

Dr. Grordborts: Rayguns — Still a bit of a mystery, these Rayguns come from an exclusive collaboration between Wētā Workshop (special effects artists behind the Lord of The Rings trilogy) and FLUF World. According to Dr. Grordborts’ copy, he believes trouble is coming for the Flufs and that these handy ray guns will be useful for things like dissolving a goblin with one zap.

Fluf Haus — The IRL arm of the FLUF World franchise, Fluf Haus is in charge of get-togethers like the ones Fluf hosted at SXSW, Art Basel Miami, and NFT NYC (all of which have helped secure FLUF World’s reputation for knowing how to throw a damn good party.)

Futureverse — The platform that will build out FLUF World, Futureverse is focused on building a revolutionary open metaverse (open here refers to building what you want as opposed to what you’re given). If you’re hungry to learn more about Futureverse, definitely checkout Defiant’s extensive video rundown of Futureverse’s whitepaper. Also, in recent news, Keanu Reeves and his partner Alexandra Grant have come on board as advisors for The Futurverse Foundation.

ASM — A protocol designed to make finance and gaming smarter, ASM allows you to create and train AI-powered agents. Fluf World will be working closely with ASM to add individuality and agency to various aspects of its ecosystem. Plus, if you had held a Fluf back in Fall 2021, you would have been eligible to mint an ASM AIFA Genisis Box, which was later revealed to contain an ASM Brain and four ASM AIFA All Stars.

Mycelium Token — In addition to serving as the in-game currency (rewards, staking, breeding, charging, etc.) for the Fluf World ecosystem, Mycelium will also enable governance and use by node validators to secure proof of stake on the Root Network (running on Ripple rails).

ATEM Car Club — Select Fluf World holders get Membership Cards to ATEM Car Club, a web3-icized car racing experience that enables direct ownership of online car racing assets, as well as customization of said assets, and a community to share them with.

As you can tell by now, FLUF World means business when it comes to building out the “broad and deep” foundation. Even after 1400 words, we’ve not come close to scraping the surface of this project’s finer nuances, let alone what it might look like once they’ve truly built upwards — but we suppose that’s what has folks so excited about this project — what started as a collection of 10,000 head-bobbing bunnies, has since grown into a sprawling web3 franchise with tentacles reaching into myriad spaces/industries. It’s a rare project where, simply owning a solitary bit of the Fluf World ecosystem also means you own a front-row seat to one of the most prolific, methodical, and ambitious NFT movements out there.

Many thanks to the folks over at FLUF World for keeping us thoroughly entertained and intrigued.