Gary Vee and The Grey Pill

All I had to do was say his name and your limbic system lit up like a Christmas tree.

Chances are, we've all had some form of peripheral exposure to Gary Vee (short for Gary Vaynerchuk.) Perhaps you've seen videos of him speaking at a rapid clip and using words like 'Fuck', 'Energy', and 'Kindness' in high-frequency combinations.

The thing is, Gary's a pretty divisive character — and this is not just my opinion, but something that Gary admits wholesale: “there's plenty of people that think I'm Walt Disney and I think there's people that think I'm a snake oil salesman . . . I understand. I have a personality trait that for many people, especially in a quick snippet in an Instagram post, or a LinkedIn post, can really throw one off.”

Now, add on the fact that Gary Vee is becoming a virtually unignorable presence in the NFT world — regardless of your feelings toward him, he's got reach, he's got a religious following, and he's going to be the way many people first hear about NFTs.

That's why I've taken the pill and gone down the Gary Vee rabbit-hole — beyond rumor or conjecture, I want to get to know the new preacher in town. So, I've put in my '50 hours' on Gary, I've filled a word document with encyclopedic notes on the dude, and I'm hoping to get a better understanding. First off, how did this guy get so big? Why is he in NFTs? And what's the deal with his collection VeeFriends?

For one thing, Garry Vee seems to be a true bottom-up success story. After Gary's family immigrated to the US from Belarus in 1978, they lived in a studio apartment out in Queens, New York . . . nine people in the studio apartment.

Later, his family moved to Edison, New Jersey, (which being an NJ native, I can tell you is not paradise) and it was there in Edison, where Gary grew up and started his first business at the age of seven, selling lemonade, and where in high school he made tens of thousands reselling baseball cards and toys.

Eventually, at fourteen Gary joined the family business, a liquor store called 'Shopper's Discount Liquors', where he bagged ice for $2/hour. As the story goes, he was working at the family liquor store during the 90's when the first wave of internet hype formed. Feeling a strange static in his entrepreneurial blood, Gary seized on the internet boom as a chance to move his dad's liquor business virtual, first by creating Winelibrary.com and then 'Wine Library TV', over time pushing their revenue from $3 million a year up to $60 million a year. 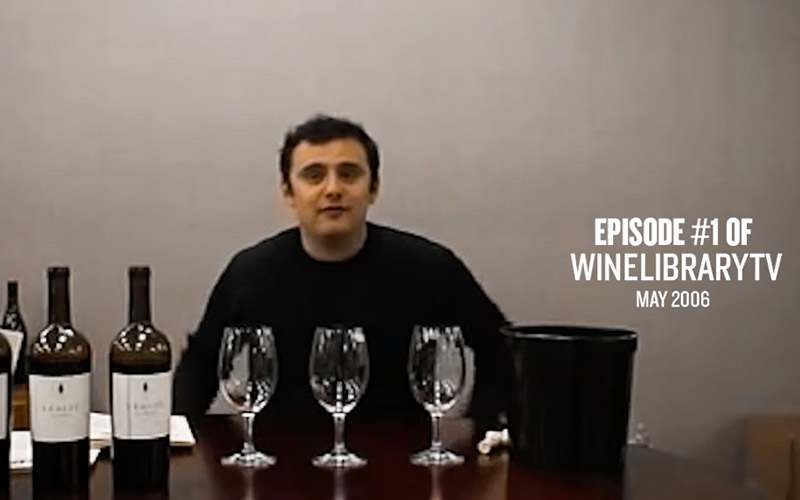 The rest is history:

Similar to his early investments into companies like Facebook and Uber, Gary was quite early with crypto. He first learned about crypto from venture capitalist Aaron Batalion back in 2014, but was initially dismissive of the space, saying that it felt like 'outer space' to him.

It'd take a few more exposures and careful conversations before Gary would find himself properly convinced of crypto's potential. He'd make his first investment in Ethereum back in 2015 when it was priced at $0.06 (or so he says, $0.06 might have been a slip of the tongue.)

In terms of getting into NFTs, Gary has mentioned that he'd watched collections like CryptoKitties come and go right in front of his eyes, but it wasn't really until his 2020 conversation with Kevin Rose (now Proof and Moonbirds founder,) that he dove into NFTs with the purchase of his first CryptoPunk, a moment he looks back on as his 'eureka moment'. 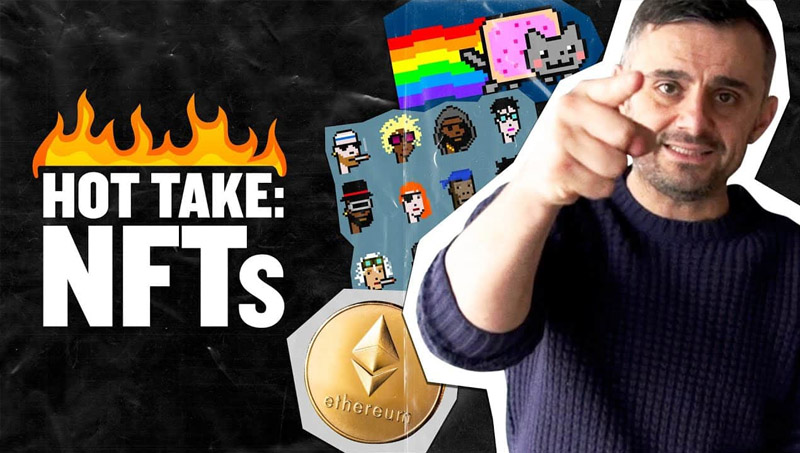 Months and dozens of research-hours later, Gary was talking about NFTs left, right, and center, whether it be creating his own collections, or investing widely in other projects/artists like BAYC, World of Women, Doodles, and XCOPY.

Admittedly though, it's the branding side as opposed to the art or the finance side of NFTs that really got Gary excited — he's even said: “I don't talk a lot about Bitcoin or the alternative currencies because I really don't understand that game. I very much understand why people wear Nike, Rolexes, buy Mercedes-Benz, . . and that's why I'm so very focused on NFTs because I think they represent social communication in a way that other things come natural to me. And that's where my focus is.”

Like all of us, Gary sees and understands NFTs through the lens of his prior experience, which in his case is media and branding. For him, NFTs represent an unprecedented opportunity for consumers to invest, not just passively through stock or whatever, but to directly, tangibly own a part of the images, people, and narratives that compose their favorite identity-forming brands. And if that doesn't make sense, then simply look at VeeFriends.

On the surface, VeeFriends is a 10,255 item collection featuring 268 hand drawn characters (by Gary Vee himself,) characters with alliterative names like “Adventurous Astronaut,” “Courageous Cockatoo,” or “Empathetic Elephant.” Below that surface; however, VeeFriends is about building a long-term franchise similar to Hello Kitty or Scooby-Doo, and doing that through “meaningful intellectual property and extraordinary community.”

Let me just say, VeeFriends is excruciatingly elaborate, so hold on to your seats.

Part of the franchise vision is realized by having VeeFriends function like an alpha pass, similar to Proof Collective, except with VeeFriends the alpha you get is Gary himself. Everyone who owns a VeeFriend (series 1) gets a 3-year ticket to Gary's VeeCon, a four day conference that's "a mix of Davos and South By Southwest, a little of pop culture... a little of summer camp", and will be held for the first time on May 19th-22nd.

On top of VeeCon, certain rare VeeFriends NFTs grant special access to Gary. For instance, those holding a 'Mentor Meeting Mongoose', have access to three, two-hour personal mentoring sessions with Gary in NYC. Likewise, a 'Basketball Butterfly' grants access to a two-hour game of basketball with Gary Vee and four surprise guests — picture that: Gary sweating heavily in front of a Basketball-Butterfly-holder, arms raised high to block a shot, and through his choppy breathing he's still going: “by the age of 7, 80% of my activities outside were business.”

Genuinely though, the more I looked into VeeFriends, the more impressed I was — Vee friends is the NFT equivalent of a swiss-army knife, just when you think you've got it figured out, a hidden feature is revealed — like VeeFriends Mini Drops, a sub-collection within VeeFriends that periodically airdrops NFTs to eligible VeeFriends holders (for instance, 'Spooky Vees' for Halloween-centric VeeFriends), but also, is more broadly home to various VeeFriends collaborations (like 'Goat's Arrival in Creature World' a collaboration with Creatures' Danny Cole, or 'Where My Goats Go' a collaboration with Isaac 'Drift' Wright.)

Hang in there — there's still 'Book Games' (which, either I don't understand, or which might loosely be a ponzi scheme, but basically, the gist is that Gary Vee book purchases are rewarded with NFTs that can be burned for other perks and rewards).

And, we can't forget about VeeFriends Series 2.

If Vee Freinds Series 1 is about alpha, accessories, and access, then VeeFriends Series 2 is Gary's heavy step toward actualizing a long-term franchise. Building upon the original characters from Series 1 (as well as adding in a few new characters,) Series 2 boasts increased detail in terms of rarity, poses, scenes, and way, way more permutations (55,000 items). Also though, Series 2 takes a sincere whack at the real world, introducing a VeeFriends trading card game (and bringing Gary's life-long passion for trading cards full-circle.)

We could go on, there's plenty more fine-details regarding VeeFriends and its myriad layers of content, but for now you get the basic picture.

I don't know if it's the fact that I've been reading and watching too much Gary Vee content, but I find myself, as I wrap up here, wanting to make some sweeping statement about Gary Vee.

That's why this article is titled 'Gary Vee and The Grey Pill' — because no matter how much research one does on Gary Vee, it's hard to conscientiously draw a black or white stance on him and his work.

For one thing, Gary's a self-made multi-millionaire, a true sort of American-dream type of guy. And ok, he's got a divisive and possibly exaggerated personality, but that's a huge part of why he has succeeded; he commits to his own version of truth and he doesn't look back, or in his own words: “looking backward fucks with your neck.”

As for his involvement in NFTs, it seems imperfect but genuine and intriguing. After all, Gary went from being an observer to being a passionate contributor in the NFT space in 0 to 60 seconds. Nevertheless, VeeFriends and its sub-collections don't feel like a quick opportunistic cash-grab, but rather a sincere attempt at building out a long-term, albeit sprawling vision.

Personally, I was impressed with VeeFriends, VeeFriends Mini Drops, and VeeFriends Series 2. Gary's NFT collections are way more intricate and thought out then I realized. Even the artwork for VeeFriends, which from a glance might appear low-effort, is quite thoughtful when you consider how it ties into the broader themes of positivity and community that he aims for with all his work.

I will say; however, perhaps as a piece of advice to Gary even, that if VeeFriends (and its accordant sub-collections) are to succeed as a long-term franchise, then it wouldn't hurt to simplify things a bit. Not only is he spinning three separate plates with his three current collections, but each collection has myriad smaller and more fragile plates spinning inside it. I must have spent hours researching VeeFriends and the Book Games token system, and I still don't fully get how it works.

Maybe one day I can sit down with Gary, virtual or not, and he can clarify some of those VeeFriends nuances for me.

In the meantime, I look forward to seeing what he's got cooking in NFTs next. And for you, I hope you have gotten a slightly fuller picture of Gary as an individual and NFT enthusiast, or at the least, I hope you've been entertained — because regardless of whether Gary is your cup of tea, you've got to admit, he is certainly not singular, boring, or lazy — he is the grey pill.

Disclaimer: This is not financial advice. This article is strictly educational and is not investment advice or a solicitation to buy or sell any assets or to make any financial decisions. Do your own research. See Flip's Terms of Service for more details.